Do you remember the popular late 70s early 80s TV series –The Six Million Dollar Man staring Lee Majors that opened with the words “We can remake him. We can make him better?” The premise was the Majors character had been injured beyond recognition, but with the aid of technology could be remade into a stronger more powerful version of himself.

This was science fiction and we liked it. It allowed us to lose ourselves in a fanciful “what if.” But we should have paid more attention and given more thought to where this new technology was leading us. While the idea expressed in the opening of the show, “We can remake him” applied to a man, what we missed was what corporate America was already beginning to recognize was possible for remaking not only our society, but remaking us. What followed was the unleashing of an avalanche of technology and a Tsunami of information that has overwhelmed, buried and threatens to drown us in details while a few oligarchs and corporatists twist the meaning of America into something they control and manipulate for their own ends and to satisfy their own greed.

In the United States the top 1% control 42% of the wealth. The top 5% control 69% of the wealth; the top 10% control 80%, and the top 20% control 93% of America’s wealth. The ratio of CEO pay to the average worker in the U.S. is at an unbelievable 475:1! CEO compensation in no other nation on the planet is remotely close to the U.S. Compared to some of our biggest competitors (Japan 11:1, Germany 12:1, Canada 20:1, Britain 22:1) the scale is mind-boggling. It is no wonder then our two so-called political parties together represent only the top 20%. In the presidential election campaign in 2012 neither party bothered to more than mention the plight of working class America. They mentioned the middle class occasionally, but neither paid attention to the 80% of us who make the lives of wealth and luxury enjoyed by so few possible through our work and consumption. 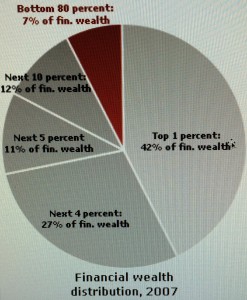 The poor have little income and so don’t figure into the calculus of our electoral system other than the necessity of trying to manipulate their voting habits on Election Day. Poor and minority voters are being suppressed and denied their right to vote. Control of the electoral process begins with control over who votes. Our country is being made over. Our belief systems are being slowly altered and twisted toward acceptance of the new order. We are being homogenized and are expected to conform. We can be different as long as we all fit in. The principal propaganda organs, the corporate news, are selective in their coverage of events. Presentation is carefully managed to give us the approved picture. Managed news is our new reality. No one “thinks” until the thought shapers on talk radio and TV give their blessing to the new orthodoxy. The manufacture of consent that began on Madison Avenue during World War I has fully matured. We think what we are told to think, and we do what we are told.

Those in the new ruling class use the tried and true methods of every past tyranny to perfection. Fear is the principle weapon. It is easy. It is convenient, and it is effective. We live our lives under constant media bombardment and assault telling us to be afraid of anything or anyone different, the weather, the sky, our shadows, and ourselves. It works. We are.

*Graph: Distribution of Financial Wealth in the U.S. 2007 appearing in Inequality of wealth and income helped cause our current economic problems by Nancy Abrams & Joel Primack, Sept. 11, 2011. blog,sfgate.com