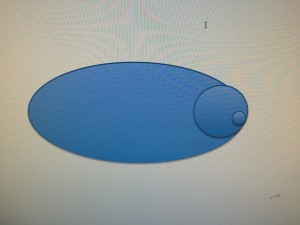 Human civilization is, when you look closely, extremely fragile. The above graphic represents all of humanity divided into three groups. This graphic is not a representation of wealth. The correlation between the knowledge and skills depicted here and wealth is not strong.

The smallest circle on the right represents the portion of humanity that is highly trained, knowledgeable and substantially understands the science, technology and ideas defining, underlying, and driving civilization. These are the scientists, thinkers, and others who imagine, create, and transform their ideas into reality.

The second group representing about 15% is the portion of humanity who possess knowledge and understanding of the ideas and creations of the first group in general ways and are key in helping keep everything working. This group is the bulk of the educated elite in society, those responsible for providing the organizational and support skills vital to keeping everything working and growing. They understand the ideas and innovations of the first group and there implications, and are key in the smooth functioning and advancing of human civilization.

The 80% of humanity in the third group represent the muscle of society that provides the labor and support to create the wealth we all take for granted and benefit. But while this group is vital to the stability of society, they are, on the whole, less educated and have little or no understanding of the science and ideas that underlie the comforts, the technology, and virtually everything they take for granted and depend upon for making all our lives comfortable. This statement is not intended to be insulting or demeaning, merely a reality.

The vast majority that comprise this group, represent most of us. We know how to turn something on or off. We know how to use the device or tool, but have little understanding how or why it works or how to build one. Most of us really don’t care, we only want it to perform the task and do the job it is designed to do and we want done. We can change the battery and if it fails we can buy a new one, but beyond that we are virtually helpless.

The darker side of this reality is most of us go about our lives doing the work and enjoying the use of the technology and tools available to us while holding on to the narrow beliefs, superstitions and ignorance that have been passed down to us.

It doesn’t take much imagination to figure out if something happens to the 5% who think and create, our civilization is in deep trouble. In fact we have history to help us understand what will happen. We need look only to the fall of Rome and the nearly 1000 years of ignorance and darkness that followed.

In 537-538 A.D. Rome was under siege by an Ostrogoth army, but Rome was too large for the Goths to encircle completely so they blockaded the city’s entrances to starve them out and then blocked the aqueducts that provided Rome’s water. Without water the city couldn’t support its large population of almost a million people. Since no one remained with the skills necessary to repair these aqueducts once the siege was lifted, the people had no choice but to abandon the city. Rome’s population quickly dwindled to around 10,000.

In the past few months we have witnessed ISIS destroying the irreplaceable artifacts and archaeological treasures of Syria and Iraq. Less than two years ago a fanatical group gained control of Timbuktu and set its treasured library filled with priceless manuscripts ablaze. The difference between the space age and the Stone Age is a slim and very vulnerable veneer of knowledge and understanding of relatively few people. It illustrates rather dramatically our failure to transmit our values; knowledge and understanding to the widest possible audience in our country and to the rest of humanity occupying this planet we share. Each day we live on hope-the hope an asteroid or comet won’t hit the earth, the hope a pandemic of some kind won’t wipe out most humanity, doing to us what Europeans did to Native Americans when they arrived in the Americas 500 years ago. We live in denial of the evidence our science has provided. We live in denial of the ideals and values that the tests of time and human experience have provided us.

Human culture and civilization is extremely fragile and held together with not much more than a wish and a hope, but we have it within our means to protect, copy, duplicate and protect all we have learned and thereby create an insurance policy against planetary catastrophe whatever form it might take. We now have the knowledge, skills, expertise, devices and means to make this a reality. The digitization of knowledge is already underway. Just as humanity has built seed banks in various places on the earth, we can create multiple depositories of human knowledge and achievement. We owe this to our predecessors and our descendants. This is one project that is a benefit to all human beings and all life on this earth we call home.